A technological transition has started in the solar panel market, with crystalline silicon panels witnessing the advent of promising thin-film technologies. These new panels have a huge disruption potential, and may capture a significant part of the $223bn solar market in 2025.

Solar power generation will need to be deployed massively to meet the current climate goals. Solar panels are mainly built from crystalline silicon, but this technology has many limitations. New thin-film modules are now able to deliver competitive performance levels, improve fast, and propose a vast field of new possibilities. They will boost currently limited efficiency and provide alternatives to the current China material dependency. This article will review these technologies, the market evolution, and which technologies/actors are the best positioned to benefit from these new developments.

Thin-film panels are the future of the solar industry

In April 2022, the Intergovernmental Panel on Climate Change (IPCC) issued a new report reinforcing decarbonization's importance in solving climate challenges. According to the report, we need to reduce greenhouse gas (GHG) emissions, decrease oil, gas, and coal production faster than expected, and dramatically increase renewable energy production (see graph below). All prospective studies about energy supplies for 2050 show that solar power will be the primary energy source, accounting for >40% of the total energy supply. 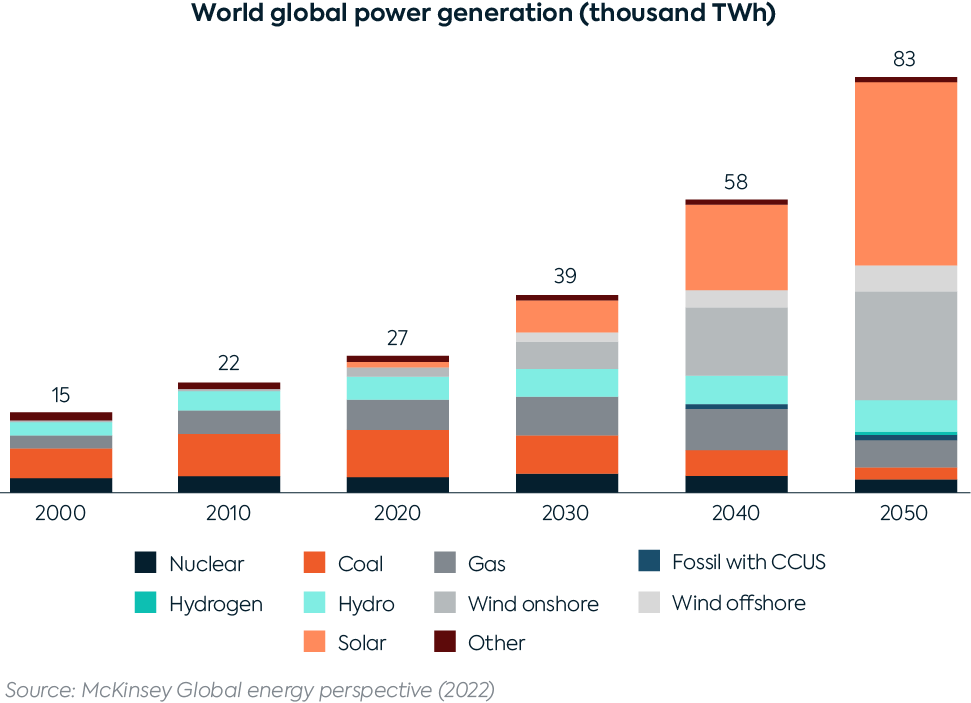 Today, crystalline silicon solar panels are among the cheapest renewable solutions, easy to manufacture and install. They can be installed in small areas on individual houses' rooftops or in large-scale solar plants. Technically, many places worldwide could host massive solar farms (e.g., deserts), then electricity could be distributed to other countries. The current geopolitical situation highlights the need for energy autonomy, hence the need for solar power generation to be installed locally in most countries. Therefore investments in solar remain significant. 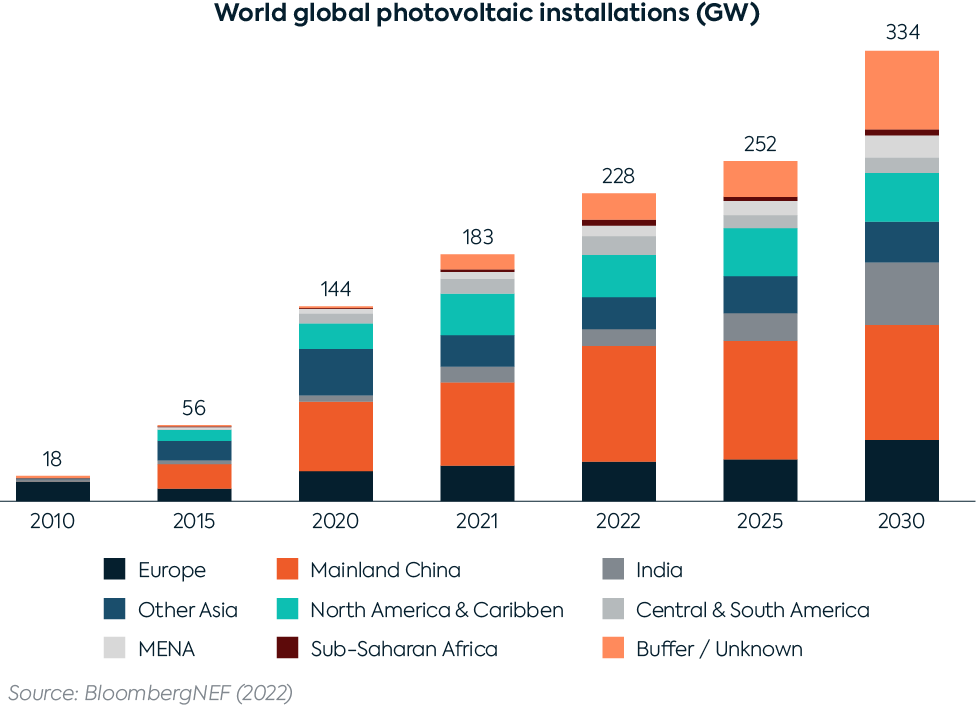 Crystalline silicon solar panels may be too bulky for the race!

Crystalline silicon solar panels are heavy and large modules, measuring 1.5 square meters or more. They are installed on top of residential roofs or cover hectares of land in case of a utility-scale installation. As a reference, the biggest solar power plants are around 6GW (equivalent to a bit more than one typical nuclear reactor in terms of energy production) and cover hundreds of square kilometers.

To achieve the 2050 targets, assuming usage of the panels available today, a surface of around 0.5 to 1mn square kilometers would be necessary. This vast area is the equivalent of France and Germany, covered by solar panels and thus not usable for anything else. Seen from another perspective, it is just one-tenth of the Sahara area.

Even if this is theoretically feasible within a global perspective, assuming all countries can participate and share space and energy transmission, the situation is much more complex when trying to ensure each country's energy autonomy. This requires solar energy technologies to achieve significant improvement and generate solar power in an area as limited as possible. But the efficiency of pure crystalline silicon cells has a theoretical limit almost reached. This technology can get some slight improvements, but something better is needed.

Crystalline silicon is mainly produced in China: while silicon's worldwide production in 2021 was 8.6mn tons, 70% was coming from China. For polysilicon grade, 93% of the production is dedicated to solar panels, and China's production share is 96%.

Dependency on China is significant. The overall solar business is thus also subject to geopolitical tensions and tariffs. Thin films require less material and energy to produce, so the impact of manufacturing costs should not create significant competitive discrepancies between countries.

Thin-film PV cells are formed by deposits of extremely thin layers of photovoltaic semiconductor materials on a backing material such as plastic, glass, or stainless steel. The thickness of a thin-film layer is in the range of a few nanometers, more than 20 times thinner than the thinnest silicon wafers. Thin-film cells are less expensive to manufacture than crystalline cells due to the reduced number of manufacturing steps, reduced amount of material, and reduced energy demand. However, they only account for 5% of the energy production capacity today. 2020's photovoltaic power production capacity was mainly based on crystalline silicon.

Review of the leading thin-film technologies

The efficiency of basic crystalline silicon modules is still the best within the current commercial PV modules, ranging from 17% to 23% (they can be slightly increased using additional layers). In comparison, CdTe thin films reach 18-19%, and CIGS thin films 12-15%. 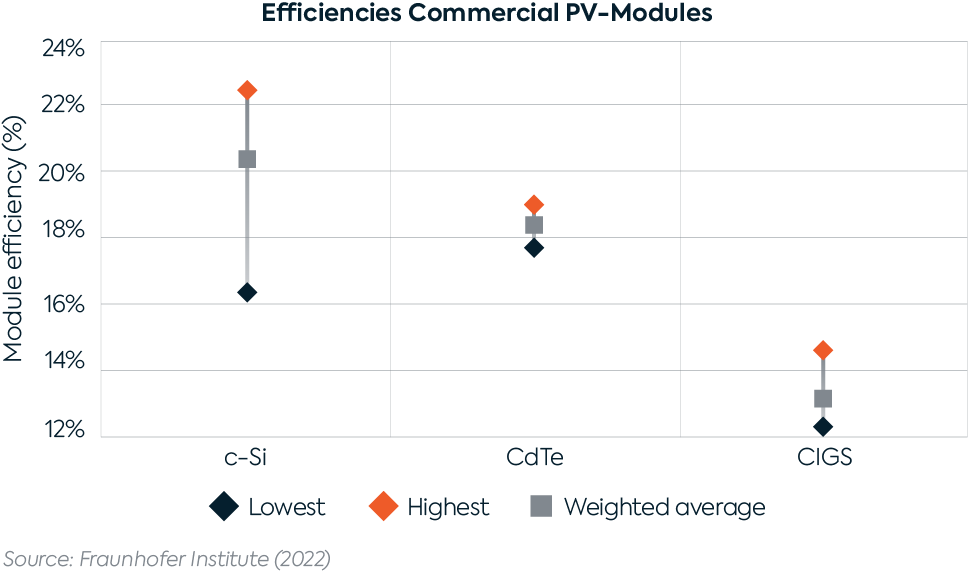 CdTe thin-films use cadmium telluride as the primary semiconductor material to capture photons. They are packed with some conductive and protective layers. They can be used standalone or added to standard crystalline silicon or thin-film layers to capture additional wavelength energy and circulate the electrons through the solar panel. While traditional crystalline silicon suffers from heat and loses efficiency at high temperatures, CdTe thin films have a better temperature coefficient, i.e., they are much more efficient at high temperatures. They also generate more power in low irradiance, i.e., they perform better in low light or bad weather conditions. Finally, CdTe thin-film solar cells can be manufactured at a low cost, cadmium being easily generated by mining, smelting, and refining zinc, lead, and copper.

CIGS thin films use copper indium gallium diselenide as the primary semiconductor material to capture photons. They are packed with some conductive and protective layers. They have a better temperature coefficient than crystalline silicon, improving their efficiency at high temperatures. They also generate more power in low irradiance, performing better in low light or bad weather conditions.

Developed by Sanyo in the '80s and now available for all (patents expired in 2010), a-Si thin-films used to have a significant market share but failed to reduce their prices and increase efficiency. A-Si thin films have a maximum efficiency of around 12% and have the best temperature coefficient. A-Si is now used as an add-on to crystalline silicon technology: in HJT technology, a-Si thin-films are added to both sides of the standard solar cell. The two extra layers capture additional solar energy that the silicon cell can't. This technology is used in some of the most efficient solar panels for individuals.

Organic photovoltaic cells use organic semiconductors as the light-harvesting active layer. The technology is still in the research and development phase. It shows reasonable cell efficiency (15%) but a reduced lifetime (10 years). It can be transparent and is ultra-light. It is effective even with the lowest light conditions.

Perovskite and tandem cells based on perovskite

Perovskite is a general name for a large group of chemical compounds composed of calcium, titanium, and oxygen. The technology is in the research and development phase and has already demonstrated very high efficiency in the lab for tiny cell sizes (29%, already exceeding the practical efficiency of crystalline silicon solar cells). Perovskite films have very low electron mobility, which means that the maximum speed of electrons is slow, limiting the current flowing and the size of the cells (to a few tens of square centimeters). They also have a reduced lifetime. For all these reasons, they are only used today in tandem cells: a perovskite thin-film is placed on top of a crystalline silicon base or another thin-film base, where it absorbs different spectrums (infrared) and increases the efficiency of the cell.

Gallium arsenide (GaAs) is one of the most common III-V semiconductor compounds in PV applications. The GaAs thin-films solar cells have very high efficiency (>30%) and excellent heat resistance properties. This technology is costly (100 times more than other thin films) and is used for spatial and military applications.

We summarize below the leading thin-film technologies' potential. To draw an overview of the medium-term future, we look at lab performances instead of commercial ones. 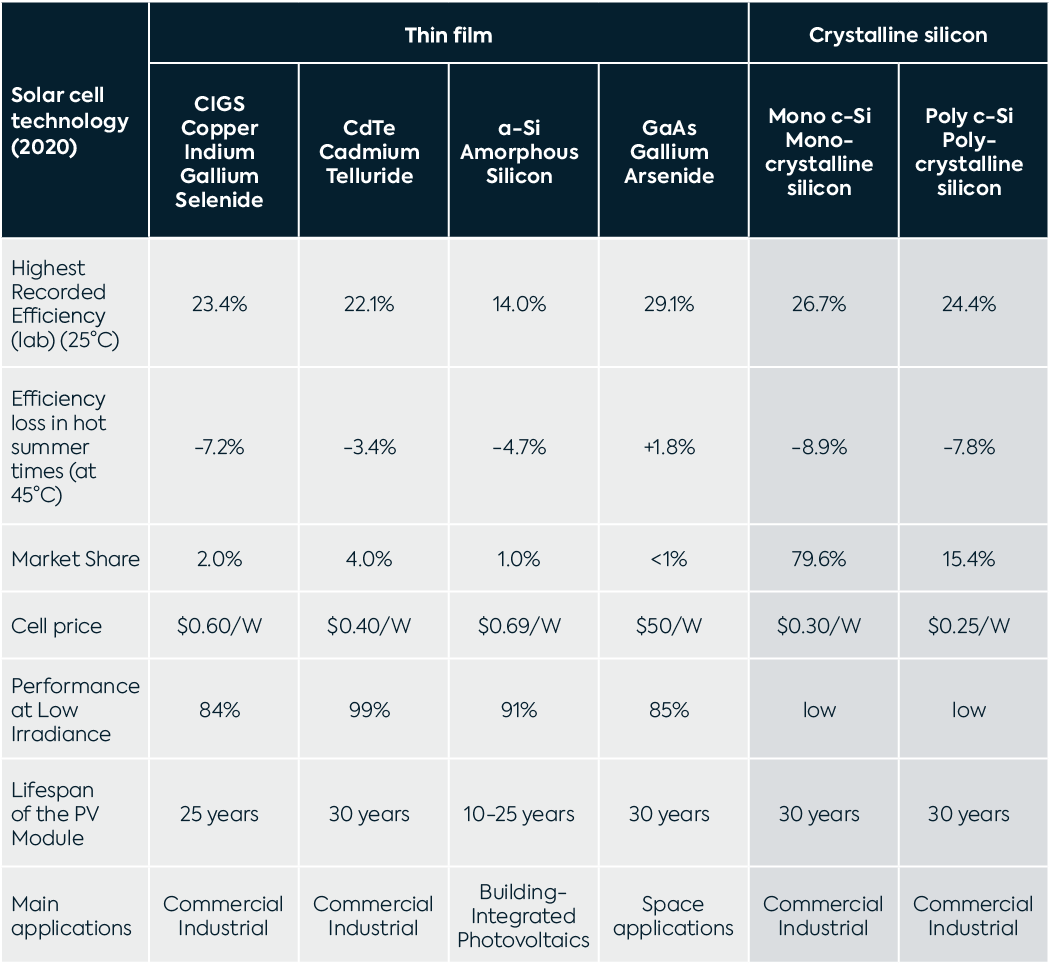 Thin films will address many applications: 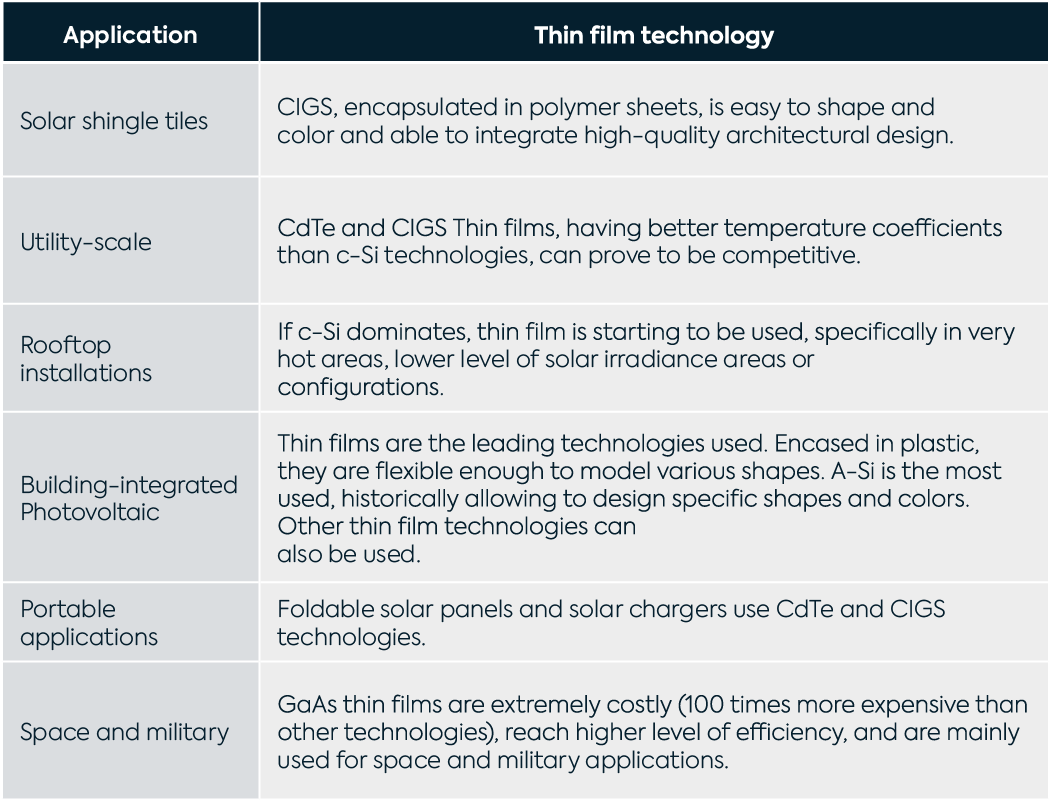 With thin-film production increasing, costs will come down, and efficiency will increase along with continuous technology upgrades.

We foresee that thin-film will be as well or better positioned in the long term than c-Si. However, c-Si will also progress using less silicon material (thickness reduction) and adding extra layers to increase efficiency. In the end, we probably will have mixed technologies, using combinations of different layers to capture as many as possible different wavelengths and ensure optimal electron mobility.

Thin-film panels are the future of the solar industry

In the early 2000s, a-Si was the only thin film available, but CdTe and CIGS thin films have since taken the lead (due to their much higher efficiency). 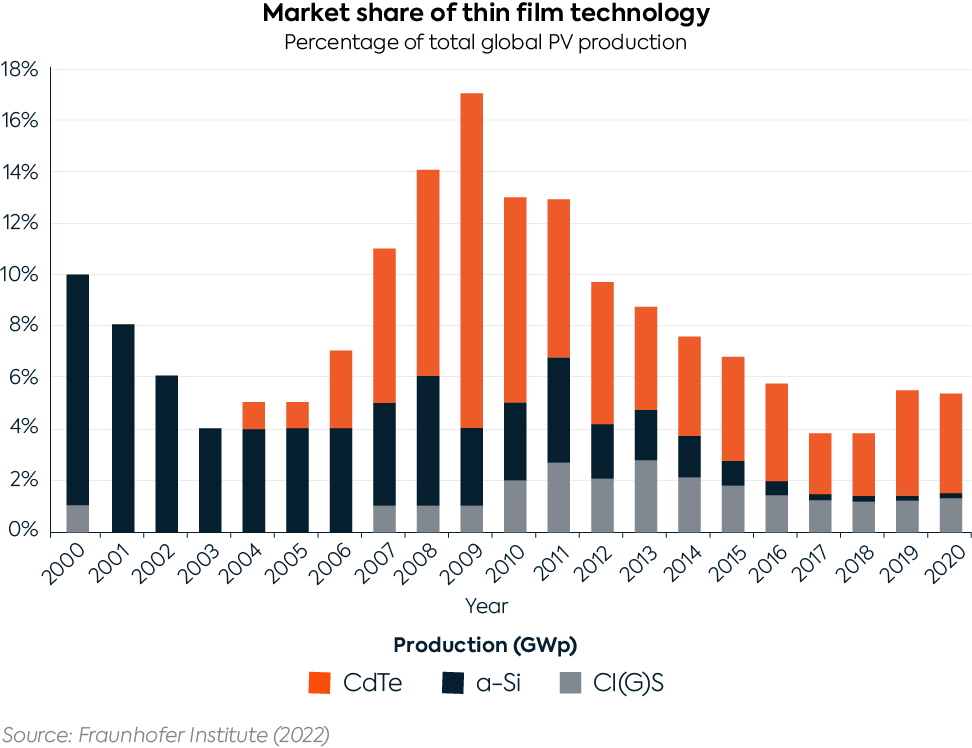 It should be noted that the reduction in total market share after 2010 is not due to a decrease in thin-film production but to the considerable acceleration of crystalline silicon production.

The thin-film market share (5% in 2020) is expected to increase 2.5x from 2020 to 2030 (for a 19% CAGR), with CdTe being the fastest-growing segment. Today, utility-scale is the main application for thin-film, followed by commercial and residential. All three segments will grow, but utility-scale will lead the race. Additionally, architectural applications will rise.

Thin film, one of our long-time convictions

Solar energy production is one of our biggest convictions, representing more than 20% of our Sustainable Future strategy. We have been exposed to players in the thin-film segment for a long time. First Solar, the leading U.S. CdTe thin-film producer, has been part of our portfolio since the beginning of the strategy. Its 2022 and 2023 capacities are already fully booked, and the company is investing to double its manufacturing to 16GW/y by 2024. We are reinforcing this segment, closely monitoring all upcoming innovations that might affect the solar market to capture this sector's growth fully.

Companies mentioned in this article

Anti-dumping investigation on solar imports: is it...