Back to growth outperformance

Since mid-May, growth is outperforming value. Have we entered a renewed cycle of growth outperformance?

Chances are tilted toward a short-term positive performance of the stock market, along with a renewed long-term cycle of growth outperforming value.

Economic growth could surprise on the upside before resuming its downtrend, while inflation is bound to continue its downtrend, even if it is not yet reflected in the main indicators. For the short term, a goldilocks environment for the stock market is possible. Could a bottom be in ahead of the recession?

Contrary to the main indices, growth stocks made their lows between May and June. We maintain our idea that the year's second half should turn out to be better than the first half.

During the first semester, growth stocks got hammered mainly because of the tighter-than-expected Fed policy due to higher-than-expected inflation. If our thesis on growth and inflation proves correct, i.e., both are declining, the risk over the next 6 to 9 months that the Fed will surprise again as much on the tightening side appears relatively low. As a result, growth stocks should not experience a similar drawdown as in the year's first half.

Impact on our Investment Case

Economic growth has been trending down since Q2-2021. The current downtrend, amplified by tightening financial conditions to contain inflation pressures, will probably lead us to a recession. Leading growth indicators such as PMI are close to contraction levels in the U.S. and already below 50 across Europe.

However, a short-term uptick should not be excluded. Other growth measures, such as the GDPNow from the Atlanta Fed, point to a 2.7% growth in Q3-2022. Moreover, the recent job market numbers with better-than-expected Nonfarm Payrolls, a lower unemployment rate, and even negative government payrolls prove the economy is not as fragile as feared.

Many leading indicators are pointing to a significant slowing in inflation pressures. For example, the ISM Price Paid, which usually leads the CPI by 6 to 9 months, is already decreasing significantly.

Besides, freight costs are down >60% globally. For instance, the route from Eastern Asia to the West Coast of North America went down from $20'000 in September 2021 to <$4'000 now. Moreover, the levels of retailers’ inventories are reaching 20% YoY. The previous maximum was in 1995, with a 10% YoY increase. Anecdotally, Lumber prices that made headlines last year are back to their pre-Covid level, plunging by more than 60% YTD.

Consumers’ expectations of inflation are continuing to go down. The Michigan 5-Year inflation expectations survey is now at 2.7%, back to the levels of early 2021 and below its 35-year average. Similarly, inflation breakeven currently trades at around 2.2% from a high of 3% in April 2022.

However, shelter is one of the main components that continue to put upward pressure on inflation. The latter weighs for one-third of the CPI. Lately, it has been the main contributor to inflation; at least, it prevented its reduction. Indeed, MoM CPI was +0.12% while MoM CPI ex-Shelter was -0.36%.

The problem is that Shelter CPI is a lagging indicator of the housing market and will only start to decline in a few months, despite a shaky housing market. The Case-Shiller index went negative MoM for the first time in a few years. Many other housing market indicators suggest a strong cooling, if not a freezing, of this hot market, given the rapid rise of mortgage rates from 2.8% in September 2021 to close to 7% now. 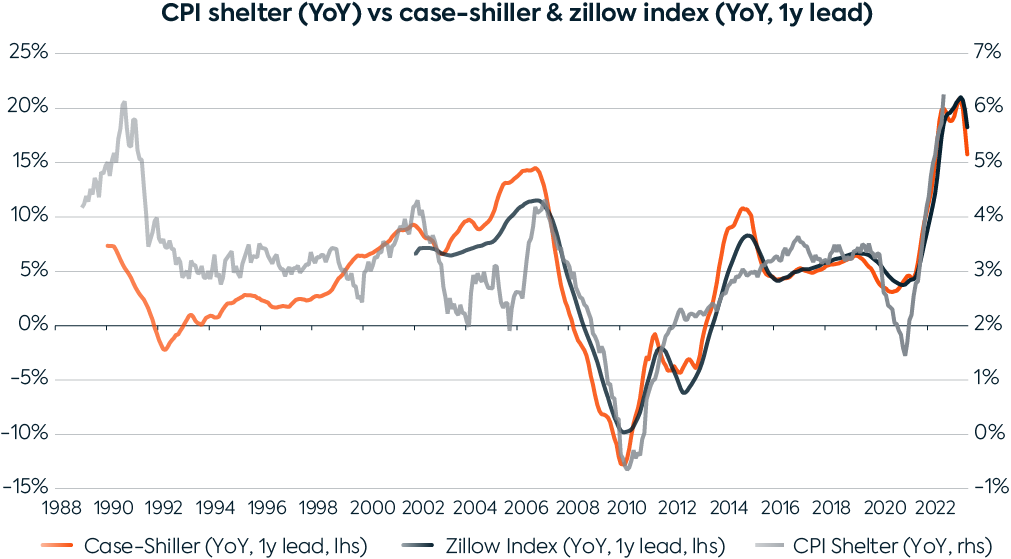 Growth stocks tend to perform well when expected returns diminish, typically when growth and inflation slow down. This was the case post-Great Financial Crisis, with interest rates trending down and muted inflation, forcing investors to harvest returns into growth stocks. However, growth stocks are negatively correlated to the rapid rise of real interest rates and suffer from liquidity tightening. We believe these two components are peaking, suggesting a higher chance for growth stocks to rise by 30% than to lose another 30%.

On the other side, value stocks tend to be more cyclical and, for the most part, are not immune to an economic downturn. Moreover, they did not decline as much as growth stocks during the tightening financial period and may underperform growth stocks going into and during the recession.

In other words, given the global drawdown across asset classes, the level of interest rates, the Fed expected path of tightening, and investors' positioning (cash position hitting 2008-era high), we believe chances are tilted toward more upside than downside, especially for quality-driven, FCF-positive growth stocks.

Not only should growth stocks continue their outperformance started a few months ago, but some sectors should benefit even more from the incoming recession. Indeed, with massively below-average productivity and a shortage of a working-age population, the need for automation is all the more pressing.  Sectors catering to this need can have a similar fate going out of the recession as the Cloud did after the 2008-2009 recession or the Internet after the 2002 recession. Within our portfolios, themes such as AI & Robotics, Security & Space, and even Fintech offer such exposure.