The current Ukraine-Russia war is reshuffling the cards of energy and security dependency, with countries resetting their priorities in terms of national interests. Securing energy independence will act as a very powerful accelerator for renewables.

We believe that a new energy paradigm is to emerge, with countries (especially the E.U.) seeking energy independence and security. Renewables will be the biggest beneficiaries of this new paradigm and deployment is likely to occur at a much faster pace than anticipated. Residential solar, which benefits from higher flexibility, should be a clear winner.

The role of Russia in commodity supply

Russia is one of the world’s biggest commodity producers, and the ongoing war and related sanctions are reshuffling the cards of commodity supply.

Looking at hard coal, even if volumes have declined in recent years, Russia remains the E.U.’s largest supplier, representing 46% of the imports, followed by the U.S. (15%) and Australia (13%).

Russia is also a key supplier of aluminum (representing 7% of global production and exporting ¾ of what it produces) central to transport, machinery, and manufacturing industries, palladium (40% of the global output) notably used in the auto industry for making catalytic converters, and nickel (7% of global supply) where it is the largest producer of high-grade sulfide ores (used in some lithium-ion batteries). 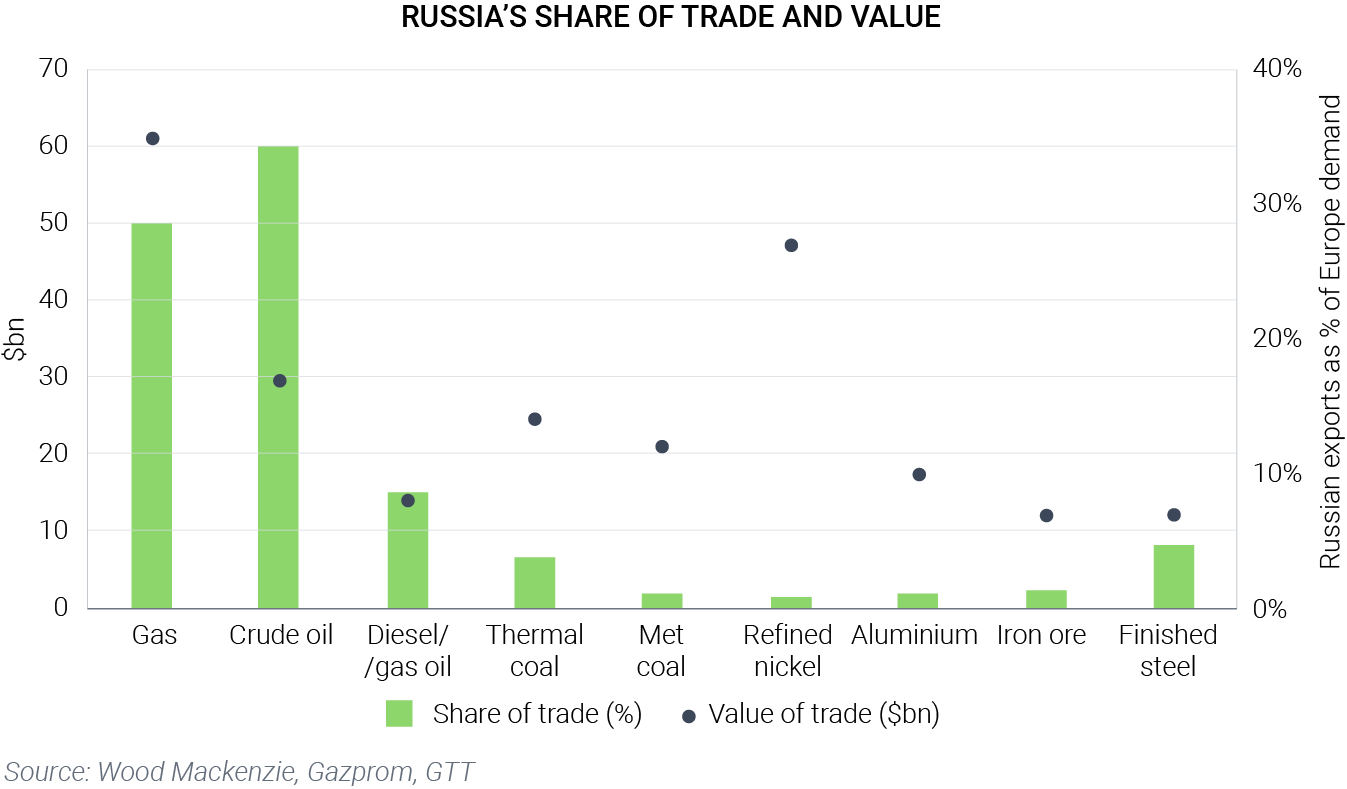 A parallel to the '70s oil shocks

As mentioned in our previous note, many differences and similarities can be drawn with the '70s oil shock, notably regarding the oil price spike (happening at a similar pace in both cases), the dependency on oil (representing 48% of global energy generation in 1973, vs. 32% today), and the financialization of the commodity market (reducing the diversification benefits of commodities in today’s context).

However, one of the most fundamental parallels drawn from both situations is the impact that such a crisis will have on stepping up the energy transition to another level.

As Saudi’s oil minister famously said during the 70s oil shocks, “the Stone Age did not end for lack of stone, and the oil age will end long before the world runs out of oil.” The 1973 oil crisis (when Arab members of the OPEC stopped oil exports to countries supporting Israel in the Yom Kippur War) was indeed a key trigger for accelerating R&D in renewables and putting energy conservation and efficiency as top priorities. It was at this moment that several European and North American countries decided to actively look into alternative ways to generate electricity from wind, sun, and geothermal hot water.

Interestingly enough, it was also at that time that U.S. carmakers started to lose ground over their Japanese counterparts, which were better at developing more fuel-efficient models with innovative lightweight materials, front-wheel drive, turbocharging, direct fuel injection, etc.

We believe that the current crisis will be a historical trigger for the massive adoption of renewable energy sources. Unlike in the '70s, renewable technologies are already cost-competitive with their fossil counterparts, and as is often the case, human beings need a crisis to foster a change.

Europe’s action plan: if you fail to plan, you are planning to fail

The ongoing crisis has shown how Europe is dependent on Russia for energy supply. As a response to this, the European Commission (the executive arm of the EU) has recently published the REPowerEU, an action plan designed to reduce the EU’s reliance on Russian energy imports (notably reducing Russian gas imports by 2/3 until year-end).

This plan can be broken down into four parts:

1) Refilling gas storage: Europe’s storage filling level is just under 30% at the moment (enough to go through the end of this winter even in the case of full disruption of Russia’s supply). By April, the European Commission (EC) is to make a legislative proposal about achieving a minimum of 90% storage fill by the beginning of October each year.

4) Improve energy efficiency: energy saving measures such as turning down the thermostat for building’s heating by one °C (saving 10bcm/year of natural gas).

The full implementation of Europe’s Fit for 55 proposal (EU’s climate plan, adopted in July 2021, intending to cut greenhouse gas emissions by 55% by 2030 compared to 1990 levels) would lower gas consumption by 30% (equivalent to 100bcm) by 2030. As such, energy measures taken under the REPowerEU plan would help Europe further shift its gas supply away from Russia and support extra gas savings of over 25bcm a year.

The table below outlines the various measures taken under EU’s Fit for 55 and REPowerEU plans with potential gas savings (bcm equivalent). 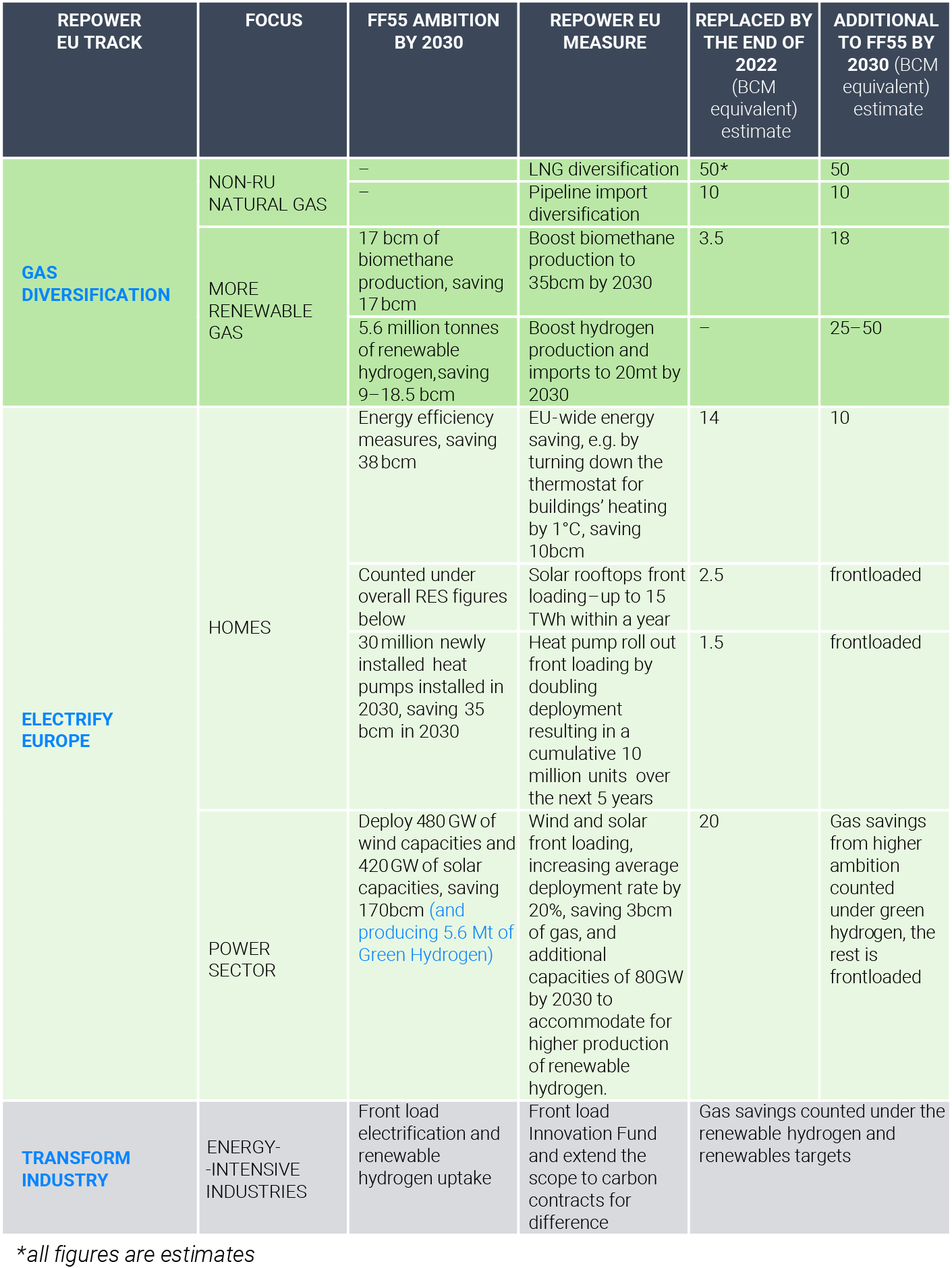 Impact on our Investment Case

Countries (especially in Europe) are now considering energy independence and security as a top priority, and renewables will likely be the biggest beneficiaries of this energy crisis. Beyond renewables, several other cleantech industries are likely to be impacted by the current supply disruptions.

A massive accelerator for renewables

Europe’s strategy is based on two pillars: diversifying supply by finding other sources of gas (LNG, pipeline from other countries, etc.) and reducing fossil fuel demand by ramping up renewable energy projects. While many of the goals outlined in the plan seem ambitious (on LNG supply by year-end or biomethane production), we believe that faster deployment of solar and wind power is more than achievable.

The EU will speed up permitting processes and provide financing mechanisms to accelerate the deployment of renewables. We believe that residential solar players that have high exposure to Europe (e.g., SolarEdge) will see their near-term demand increase, benefiting from shorter project cycles and increased flexibility.

Electric vehicles: a blessing in disguise

Additionally, soaring palladium prices (and possible shortages) is threatening automakers’ ability to produce catalyzers and accelerate the transition to EVs (which by definition do not have catalytic converters). In this sense, a palladium shortage could make the semiconductors shortage look like a walk in the park!

High commodity prices impact battery makers, with notably nickel, lithium, and aluminum prices reaching record levels. Such costs increases will either be absorbed throughout the value chain (reducing margins) or passed on to customers (depending on contractual terms and whether pass-through cost clauses are in place).

However, such material prices increases could act as a positive catalyst for lithium iron phosphate (LFP) battery makers (e.g., CATL and BYD). LFP batteries feature lower energy density but don’t use nickel in their composition. Many electric car makers have already decided to incorporate LFP batteries in some of their models (e.g., Tesla’s Model 3 standard range). We believe that current high nickel prices should accelerate this trend (see the recent announcement from Rivian).

Nuclear energy or coal power (with carbon capture) were not covered in the EU’s plan.

Given the differing opinions about nuclear in Europe (e.g., France is pro-nuclear while Germany is going away from it), the plan intentionally didn’t address this topic. Countries are free to divest, maintain, or ramp up nuclear power generation. Governments will seek to maximize nuclear production by pushing power stations to full capacity. However, ramping up nuclear power production takes time and won’t be achieved overnight.

Regarding coal, supply is already extremely tight, and since Russia is Europe’s biggest supplier, any disruption will make it even worse. Hence, we do not expect coal power generation to rise significantly in Europe.

All in all, the current commodity crisis is reshuffling the cards of energy supply and interdependencies.

We believe that a new energy paradigm is likely to emerge, with countries (especially the E.U.) seeking energy independence and security. Renewables will be the biggest beneficiaries of this new paradigm, and deployment will occur at a much faster pace than anticipated.

While some aspects of EU’s action plan might seem ambitious, we believe that such a crisis will act as a key trigger to massive adoption of renewables, especially on residential solar which enjoys high flexibility (easily deployable) and short project cycle.

Our Sustainable Future theme is well positioned to benefit from this new paradigm shift, with significant exposure to renewable energy and key European players.